The Lowdown on Local & Raw Milk 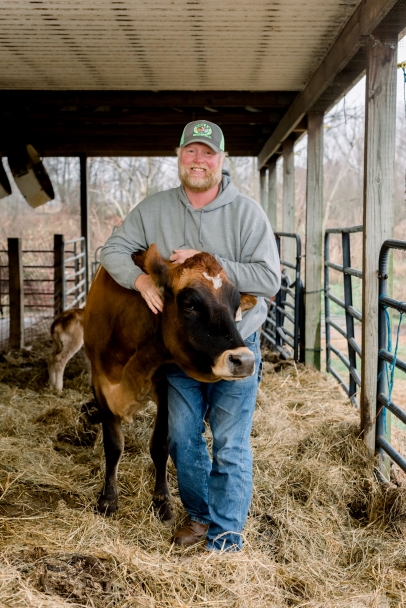 Milk, like any other food product, is best when sourced locally. It’s fresher and contributes to local farmers and not the least of it, it tastes great. But the milk business (and raw milk in particular) is …complicated. That’s just one thing we learned when we visited Mike Armstrong (pictured) on his farm in Adairville, KY, just past Springfield, TN.

Mike Armstrong gets up at 3:30 in the morning, every morning, to milk his Jersey cows. And he’s damn happy about it. Cows are his life. His father was a dairy farmer and his grandfather before him. He never thought about doing anything else and didn’t until 2016, when doing it a different way became a necessity.

For generations, the Armstrong’s were a commercial dairy sending their milk to Purity Milk Company for processing. “We were going broke and had been for a long time,” Mike says. They had borrowed and refinanced twice to make ends meet and were still losing $10,000 a month. Some years ago, there was a program called “base building,” which took a farm’s production and sales from the months of September and October. If you produced over that, you were penalized, keeping supply and demand in line (Canada still has that system). Then the government did away with that program and let dairy farmers make all the milk they could. Prices went down and only those that could produce the cheapest milk could make it.

So, in 2016 Mike needed a niche. He had a conversation with a state inspector who told him (off the record) that he should produce raw milk; that his was the cleanest dairy that he inspected, and if anyone could do it, he could. In October, Mike went to Clarksville with one gallon of raw milk to drop off. That became the first delivery of many. 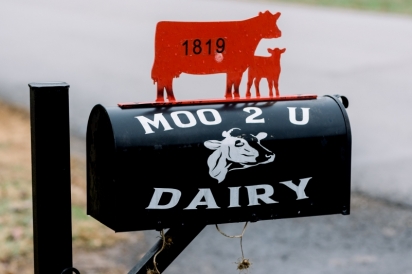 The mailbox at Moo 2 U Dairy

I had a raw milk epiphany of my own this fall, when I purchased a quart from Mike Armstrong at the Richland Park Farmer’s Market. I’m not sure why I had ignored raw milk in the past – perhaps it was the raw milk zealots that turned me off with their carob eating, kooky ways back in the 80’s. That, and my conservative training as a registered dietitian.

But I quickly found out that raw milk tastes fantastic. I poured it on my cereal, frothed it for cappuccinos, used it in hot chocolate, and cooked with it. To my surprise (and disappointment) however, my family didn’t share my infatuation, as they turned up their noses and promptly went out for lattes.

Raw things are generally perceived as good, natural, and better for you. “Sugar in the Raw” is 100% natural turbinado cane sugar, not to mention raw honey, oats, almonds, and so on. Apparently, raw milk has a PR problem. But the less-than-favorable perception could also be because it's illegal in Tennessee.

Because raw milk is, well, raw, it hasn’t been pasteurized, and therefore is considered dangerous by the FDA, the USDA, etc. Pasteurization is the process by which milk is heated to 161 degrees Fahrenheit for 15 seconds to kill harmful bacteria like salmonella, E. coli and campylobacter. As a result, raw milk can contain potentially dangerous microorganisms and should be avoided by high-risk populations such as young children, the elderly, pregnant women, and anyone with compromised immune systems.

Thus, selling raw milk (and transporting it across state lines) is illegal in many states including Tennessee. As a result, Mike spends a lot of time making deliveries and standing at his booth at farmers markets. But if raw milk is illegal, how can Mike sell it, you ask? A convenient loophole called cow shares. Every time you buy milk from Mike, you’re actually purchasing a part of the cow, or a cow share, and that allows you to drink milk from your own animal. Voilà! Raw milk to you.

Like the attention he gives to his cows, Mike pays the utmost attention to the safety of his milk as well. His cows are registered and graze on grass keeping them healthier than those who stand on concrete in feed lots. Mike goes through a laborious process of cleaning off his cows before he milks them. He can see when the milk has some issues because of his simple, yet advanced milking system of filters. He immediately chills the milk to 38 degrees in his refrigerated tanks. The taste is better, and chances are the milk you pick up might be just a day old (or more than likely, a few hours). Raw milk advocates claim that they can digest raw milk better than pasteurized milk and have asthma and allergy relief. (Those are anecdotal, not scientific claims.)

Raw milk is popular. Mike typically runs out. The rise in appreciation of local foods and connecting with our food sources has contributed to this. The same goes for me - it was attractive for a number of reasons: It’s local. I buy it from a farmer I now know and trust and want to champion. It supports the local economy and encourages local food. It is closer to natural and farther removed from artificial processing. It’s delicious. (The last being the most important). Just like fresh eggs and grass-fed chicken or beef, it has a beautiful, deep flavor, like how I imagine milk tasted when our great grandparents were drinking it-- how it’s supposed to taste. 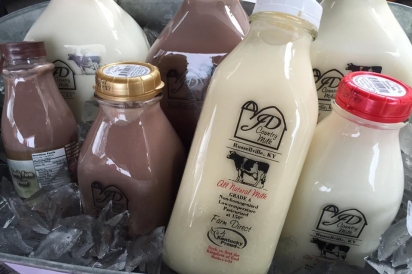 Other Local Milk
Raw milk isn’t the only local milk in town. Hatcher Family Dairy and JD Country Milk can be found at farmers markets and local markets around town.

Hatcher Family Dairy out of College Grove, Tennessee is a product of 6 generations of dairy farmers that have been milking cows on the same land for the past 200 years. In 2007, the family took a leap of faith to take control over their own bottling and distribution processes. This means that when you buy Hatcher Family Dairy products, there is a great chance the bottle of milk you have was milked, bottled, and sold all in the same day. Can you taste the difference in how fresh it is? Absolutely. And you can enjoy this milk for up to a week longer than grocery store milk, as it has not been stored by a middleman and then transported across an unknown number of state lines for most of its shelf life. This family dairy chooses to pasteurize and homogenize their milk, save for their whole milk, which they do not homogenize so that the milk has a cream top-reminiscent of how the earliest generations of the Hatcher family best enjoyed it.

JD Country Milk is pasteurized at 145 degrees for 30 minutes instead of the high temperature/short time method. This process keeps the good bacteria alive and allows the milk to keep more of its natural flavor. They do not homogenize (subject the milk to a process that emulsifies the fat droplets, and the cream does not separate).

Raw Milk laws very state by state: it's illegal to be obtained in any way in New Jersey, but can be bought in a grocery store in California, Washington, and Maine. In Tennessee, it's legal to buy herdshares only. 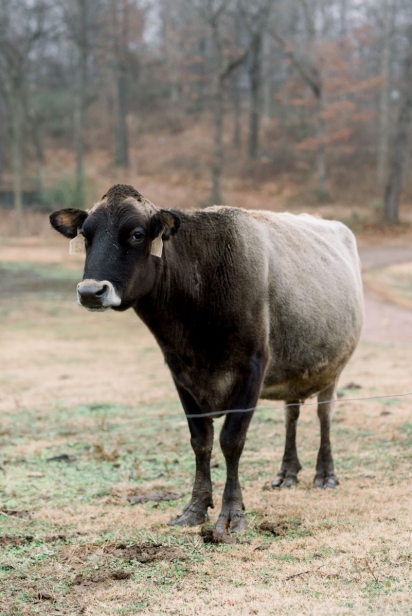 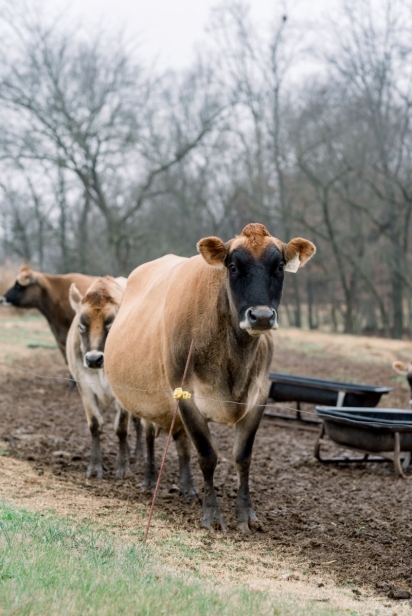 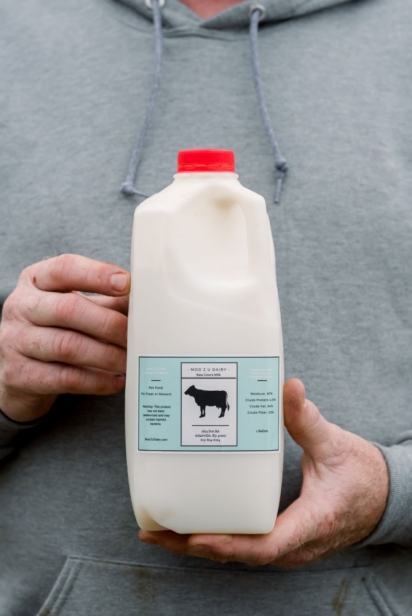 Don't Miss a Delicious Beat! Register for Our Email Newsletter

The search for the perfect, silky hot chocolate has just ended...with Pastry Chef Kayla May's of Josephine. We have her recipe, as well as the recipe for the graham crackers that are the perfect accom...

The perfect ending to a spicy Mexican meal is this creamy cool vanilla cake drenched in 3 milks.

As Nashville’s oldest continuously operating restaurant in its original location, Elliston Place Soda Shop holds a special place in the local restaurant community. The street was named for the Ellisto...

Article from Edible Nashville at https://ediblenashville.ediblecommunities.com/drink/lowdown-local-raw-milk

Local, Fresh & In Your Inbox